The little brother (or sister) of “ELVIS” rolls into town

When you work in and around an airport it is not difficult to spot something that is new and unfamiliar in the environment.

Such was the feeling today when I spotted the tell-tale signs of an Erickson Air-Crane and its distinctive rotor blades.

Sure enough, parked on the southern side of Essendon Airport (YMEN) was N194AC, in a state of partial undress but looking elegant to say the least. 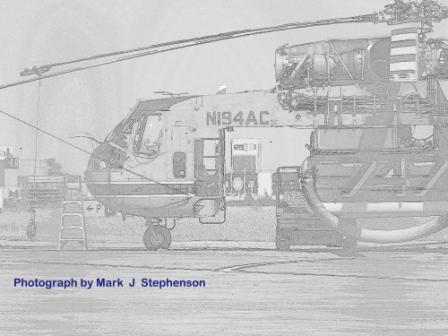 In 1996 the helicopter was leased to Canadian Air Crane as C-GFLH and again returned to Erickson Air Crane when the lease had finished.

“Delilah” was first seen in Australia in 2009, based at Essendon Airport (YMEN) and now returns for another tour of duty.

The Victorian Government are leasing two S64-E Air Cranes from Erickson to support ground crews in the event of major grass and bush fires.

According to the latest State Aircraft Unit (SAU) information, 5 Helitak helicopters have been strategically deployed around the State of Victoria already.

“Delilah” is not yet operational, but will be in the next few days.