What’s in a name

The first time an Erickson Air-Crane hit the shores of Melbourne in 1997 for firefighting duties, emergency services personnel and for that matter the public, were astonished by the appearance of this unlikely helicopter “Hero”.

With the name of “Elvis”, the 27.2 metre long, 6 bladed “dragonfly” captured the imagination of all, particularly when viewed airborne with its “dongle”, alias “hover snorkel” dangling from its belly.

Having staged one of these monsters s0me years ago during large Gippsland bushfires, they are an impressive machine.

Two massive Pratt and Whitney engines allow the Air-Crane to lift a maximum gross weight of 19000Kg plus, including 10000 litres of water.To put this into perspective, the water dropping capacity is equivalent to the capacity of  three (3)  Country Fire Authority (CFA) water tankers.

The Air-Crane also has a foam capacity of approximately 265 litres and when fitted on the front of the Skycrane a “Water Foam Cannon” can dispense 300 gallons of foam per minute with a throw of approximately 50 metres.

The Air-Crane  tank is capable of being filled in 30 to 45 seconds and it is an awesome sight to witness this machine hover over a dam, fill its tanks and “amble” away like a heavy dragonfly to drop its next load.

As a matter of interest, the original machines were Sikorsky Skycranes (S-64) however when Erickson took over the rights in 1992  to manufacture these machines the name was been changed to Erikson Air-Cranes.

“Elvis” has again been  in Victoria this year, one of three machines deployed around the state to provide a front line rapid response to the threat of bushfires and particularly this year, fast moving grass fires.

In fact given our record breaking dry and hot summer and autumn, it is likely that the Air-Cranes will have flown more hours than during the 1.1 million hectare bush fires of 2006. 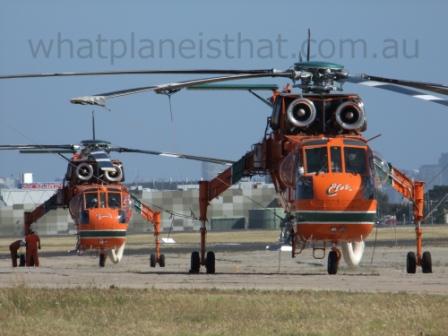 Undoubtedly many property owners threatened by fire have welcomed the roar of an Air-Crane rushing in to drop its bombing load onto a running fire, a giant orange praying mantis coming to the rescue.

The most famous of the Air-Cranes is “Elvis” and it is fair to say that most people believe that all Air-Cranes are named “Elvis”. Not so as names of similar machines include Millie, Rocky, Elsie, Georgia Peach, Malcolm, Gypsy Lady, Delilah, Isabelle and a more traditional Aussie name – Bluey!!

In 2013 the Melbourne media was swamped with criticism of the “sacking of Elvis”. How dare the government not engage “Elvis” for the critical bush and grass fire danger period!!

As it turns out, “Elvis” has been retired by Erickson  and Victoria will still have Air-cranes supporting major fires, however the preference is now for a slightly smaller capacity helicopters.

Whatever the name of the helicopter, the Sikorsky Air-Crane magnificent flying firefighting machine and continue to provide a rapid response service to assist ground firefighting forces.